Stretching over 900 miles along the west coast of the United States, California is a state of enormous contrasts and amazing diversity. From the golden beaches of the Pacific Coast to the imposing peaks of the Sierra Nevada Mountains, from the foress of towering Redwoods to remarkable Desert landscapes, the topography is as varied as the holiday options.

You have the comfortable option of flying directly, non stop into California’s three main international airports. Los Angeles, San Francisco and San Diego. Be sure to spend time exploring the gateway cities aswell as other areas including California’s Capital, Sacramento and spectacular Yosemite National Park.

California is located on the west coast of North America. It is the largest U.S. state by population, and the third largest by area. California offers something for everyone: Southern California is home to such popular attractions as Disneyland, Hollywood and the beaches in Malibu that inspired the television show Baywatch, while the northern part of California offers the iconic Golden Gate Bridge, the hills of San Francisco, the vineyards of Napa Valley, and the capital, Sacramento.

Outside California’s major cities you will find some of North America’s most rugged national parks, incredible skiing/snowboarding opportunities, and quiet and ancient northern forests including the highest mountain peak in the contiguous USA, Mt. Whitney.

Many rich Americans have chosen California as a place to live and for good reason. Not only does it have one of the best year-round climates in the world, California along with its neighbouring western states of Nevada and Arizona, also have an electric mix of stunning natural wonders; such as the fabled 17 Mile Drive and the sinuously winding cliffside road around Big Sur, the wonder of Yosemite National Park, home to the giant Redwood trees and the awe inspiring sight of the Grand Canyon and exciting cities such as Los Angeles, home to Hollywood, San Francisco and the 24 hour city of Las Vegas.

A Selection of California holidays

Compare
3.5* The Garland -California, USA 256 bedrooms  Walk into The Garland and you’re instantly transported to a secluded, urban oasis, yet close to all the action and excitement of Hollywood, Universal Studios and LA’s best attraction...
More »
Prices from £819
Make enquiry
More info 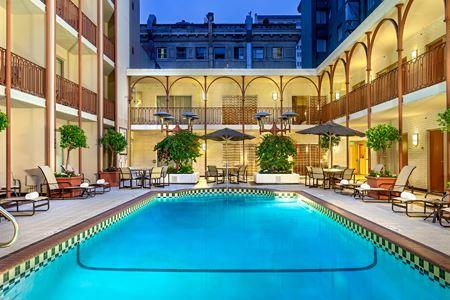 Compare
California and the Golden West-California, USA Our much-loved California holiday has been the favourite of Titan clients for many years. The attraction of the ‘Golden State’ was neatly encapsulated in The Mamas and the Papas’ 196...
More »
Prices from £2,799
Make enquiry
More info

We use cookies to enhance your experience on our site. By continuing to use our site, you agree to our use of cookies. Find out more >>

Copyright © Blue Skies Travel. By using this site you agree to the Terms & conditions.